There has been outstanding issue with the TX output of the mcHF that was discussed in the group and needed fixing. I did a lot of testing and i think i finally have the solution to address it.

When designing the mcHF RF board all modules had been fine tuned to achieve maximum performance, while the software was more or less good startup reference. Although it was possible to adjust the PA gain and software gain on the TX path, levels were adjusted to achieve a good, clean signal and reasonable power output. But then after the full Open Sourcing of the firmware, features have been added, old ones re-written many times, while performance was pushed to the limit. In a way after three years, the RF board hardware lacked behind the improvements on the firmware.

One of the most obvious problems caused by that was ability to overdrive the TX mixer so easily via the software adjustment menu. The problem could be demonstrated by attaching a Spectrum Analyzer to the probe of a dummy load and TX-ing into it from the mcHF. I have set my radio to 14 Mhz, a good middle point of the bands supported, also well into the passband of the filters.

Here what good, clean signal (more or less) looks like:

And corresponding settings in the adjustment menu: 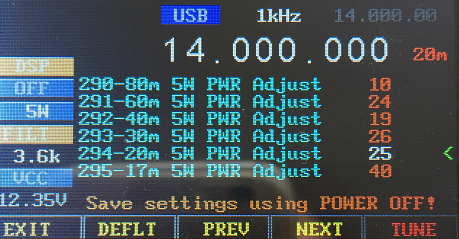 And you can see here what the over driving of the TX mixer would look like:

This could be achieved easily from the adjustment menu: 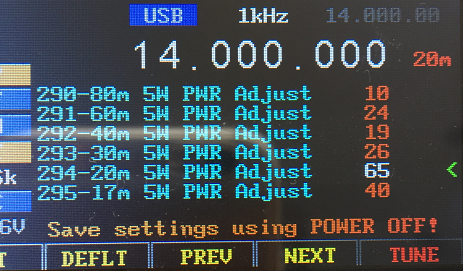 Further investigation is achieved by insulating the stages by input/output jumpers (0 Ohm resistors) and we can determine that the TX mixer should not output more than 3 dBm at the TX_MIX signal(direct measurement in the BPF module, via removal of R2).

Quick look at the block diagram pinpoints the problem to the Quad pre-amp. Via empirical means it could be determined that it provides some 10 dB of audio gain which allows to easily overload the mixer if the software gain in the firmware is maxed out.

So could it be removed ? The quick answer is yes, because the wide range of the software gain menu allows to achieve clean signal while keeping compatibility with older firmware. Also the hardware mod is quite simple – remove C114, C116,C118,C120,R98,R96,R94 and R92: 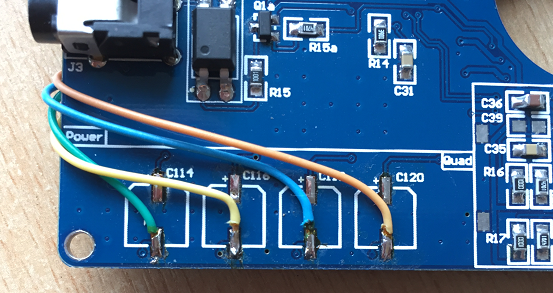 Then just put four wires across to complete the bypass. 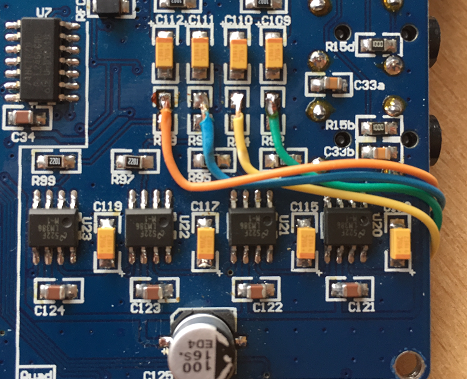 This off course is a partial solution because the gain of the final PA stage is not uniform in the full range of 3-30 Mhz covered by the mcHF. Although some mods, like transformers (T6,T7) upgrade and fine tuning of the LPFs improve that, simple bypass of the quad pre-amp and loosing 10 dB of gain can result in much lower power output on higher bands (above 18 Mhz).

The magic of MMIC Amplifier chips

I have played and tested few of those while designing the mcHF. The common problem is those chips are usually designed for GHz application and have ginormous gain at HF. But lately i have found a nice little chip from Analog Devices (formerly Hittite Microwave) that seems to be simple and stable enough for our application. The HMC482ST89 is rated at 20 dB gain, while powered with 6-12 V, bias adjustable, and DC to 5Ghz. 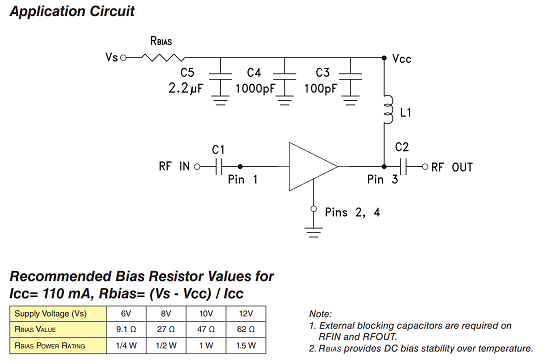 And the first thing was to build a small, prototype board and connect to the Spectrum Analyzer and the RF signal generator. 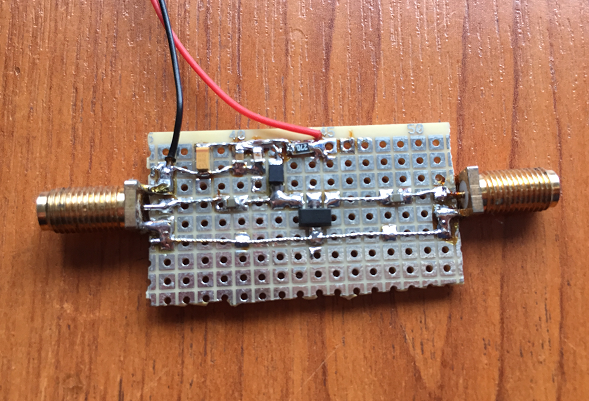 So providing the input with 0 dBm reference signal: 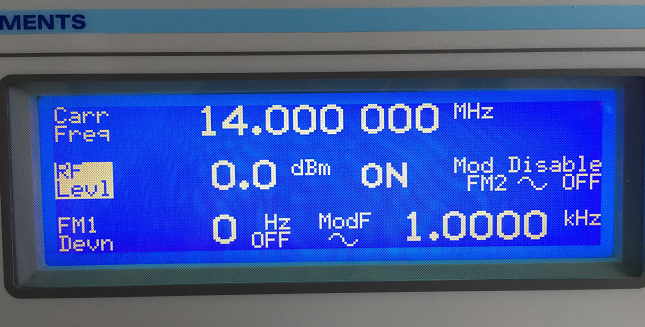 But note that limiting the gain at such a low frequency is not risk free. I have achieved this via careful biasing and 1V under voltage of the minimum pdf requirements for the chip. Otherwise the gain below 1Ghz is uniform 20 dB if following the operating parameters blindly. So the pre-amp connects to the 5V rail on the RF board and i am using 27 Ohm biasing resistor, which gives about 4.20 V supply to pin 3 of the MMIC chip.

Fitting it all together

So where is the best place to insert this new amplifier stage ? Common sense would indicate immediately after the mixer as the stage we have just removed is before the mixer. Also having the BPF filter after the pre-amp would remove unwanted 2nd and 3rd harmonic. But we have to consider clipping and de-biasing of the switches in the BPF with such high RF levels as 3-13 dBm. Another practical consideration was the modification of the PCB for future revisions. In my view the best place is just in front of the PA stage.

From idea to practice

The actual mod is realized on a small proto PCB that fits nicely next to the BPF module on the RF board, there are two GND shielding pads near by that provide good mounting point: 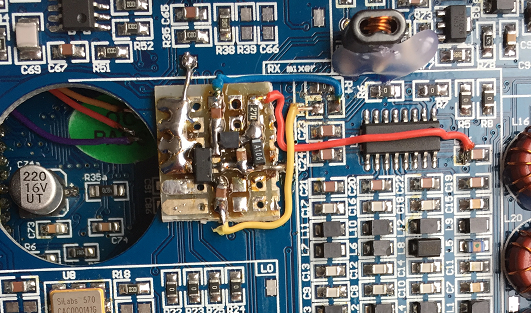 The power supply (5V) is taken from left side of C26(red wire), and input and output are patched to the R3 pads, while the jumper R3 is removed. Left side of R3 is BPF output(yellow wire), that goes to the pre-amp input and the right side is the final PA input(blue wire) and connects to the pre-amp output(T5 primary, should read 0 Ohm to GND).

The actual schematics show the values used to build the small proto PCB.

All preliminary testing show that the mod result in quite an improvement on the output TX signal, while providing enough output power in the full frequency range supported by the mcHF, without the need to overdrive the TX mixer.

Here a screen from the 5W output of the modded RF PCB v 0.5:

And the settings in the firmware used to achieve it: 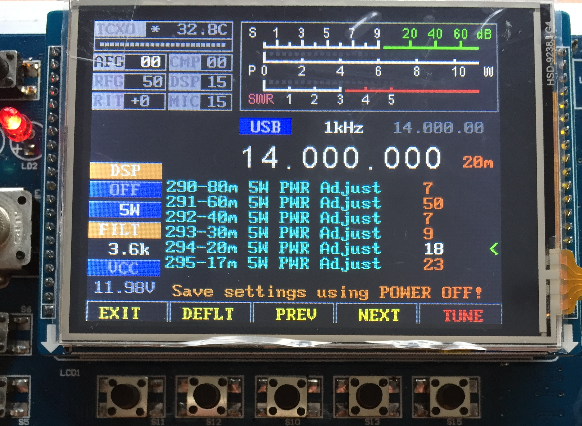 And most important, how to protect your Spectrum Analyzer input from the high TX power:

It is a series of attenuators, the high powered one is 20 W, i believe it provides attenuation of about 7 or 10 dB, while the home made one can handle less than a 1W, but is 30 dB.

I would welcome if anyone can test this mod, provide feedback, suggestions, etc. As usual, via comment here, to my email (djchrismarc at gmail) or the Yahoo group. Thanks for reading!

24 thoughts on “Long time in the pipeline TX mod”